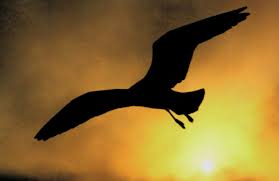 I used to stare at my bedroom walls wondering why it is that in every place I have lived I alway leave them white. The Reason in my head would remind me, once again, that the only way those walls will ever change their colour is when I did something about.

And with that, I’d turn over and go back to sleep.

Last night I sat on my front porch, taking in the midnight Summer cicada sounds in the humid air that had just became bearable. A friend of mine drove by in his pickup truck and told me to go to sleep. I waved and smiled.

Then I composed a letter to myself.

You’ve been a solid mineral mass these past four years. You paid your bills. You worked. You remembered birthdays. You were the daughter your parents needed you to be. The person who always answers the phone.

It’s a good and well existence. It’s what I call a ‘no harm, no foul‘ life. Calendars are marked. Days are known. Things and people are right where everyone knows them to be.

It’s the conclusion of Nietzsche’s Chaos isn’t it? Order … of the highest kind.

I make zero judgement here. Order is an admirable friend. Solid company in a world of appointments, lawns, people to care for, bank accounts to maintain. I get it, we need it. But we need it differently, and in variable measures that suit our frames. Some more than others.

But you? You Finn decided that because you were a Bird, you must have had it all wrong. That’s why it all washed away; because you were off being a Bird. And in the process of trying to reverse what you considered the error that was your natural you, you turned yourself into a throw away Stone. You know, the ones that others skip on the water?

I know why you thought that was a good idea. It was the only way to put one foot in front of the other right? Maybe gain some points with Humanity by blending in?

I should have stopped you Finn. I apologise. I was away, and when I got back I had lost my keys and couldn’t find the door.

It goes something like this: Order is not the sum of us. It is a part of us. And you, my Friend, simply do not need that much of it. Your equation goes beyond a quote about theory.

It took awhile, and who cares how or why you figured it out. But figured it out you did. And when you let go of other people bags, you no longer were that pebble in your own shoe.

Did you hear us cheering you on?

I know I’m late to the party. That’s just me being me, somethings never change. But as I saw you fly by just now, I thought: Ah Finn. It’s good to see you again.