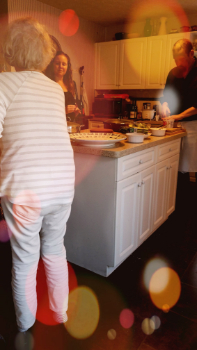 Four days ago I drove up a mountain. Then I drove down its other side. Then I went up an entire mountain range … and stayed until yesterday.

As I descended the first mountain, I passed the area that is now a symbol for my father. The hill I dedicated to him in 2018 was the only one if its kind with leaves still on its trees. It looked like a green lily pad in a brown pond. This made me happy.

On Thursday, with holly and rosemary cuttings from my parents’ house, I sat in front of my father’s gravestone and watched fluffy white clouds roll past a blue sky background as I read the words we put under his name and military ranks: Husband. Father. Patriot. Friend.

My throat tensed up. Water filled my eyes. But no tears fell.

It was just me and him. Just like it was on that final morning.

With one hand holding his hand and my other palm down resting on his chest, I swear I saw a cloud of mist float out of my father’s mouth, linger over his body the size of a meter-length Milky Way, before vanishing through the hospital room wall.

On my out of the hospital, I tripped and dropped all of his things onto the floor. A kind nurse helped me collect all the scattered belongings strewn across the hallway.

Walking to my car, it looked like it had rained.

I played Frank Sinatra’s My Way as I drove in the dark to the waiting arms of my mother and brothers.

Solitary in the cemetery, I folded my legs and stayed for a time on the grass.

I looked at the scenery.

I read the names and words on his neighbours’ headstones.

I thought maybe, if I listened very hard, I could hear his wrist watch ticking beneath where I sat.

Like I did in 2018, I shuffled Frank’s tunes for the ride back to my parents’ house, and wondered about the rest of the day.

I don’t have to tell anyone about the unpredictability 2020 has had on the entire World population, with tragic results for 1.5 million (and counting).

Knock on wood we have been spared, but my family is no exception to the pressures and burden caused by this pandemic.

Some have had it harder than others. So the therapist on my shoulder told me to be accepting of anything that could happen when family inequalities collide.

I worried for not.

I walked into a kitchen filled with the fragrant aroma of duck slow-roasting in the oven whilst Brother Drew prepped the Brussel sprouts and asparagus dishes.

Into the cozy scene of Drew’s punk rock other half Rebbie drinking tea in the oversized chair in the living room.

Into the lively discussion between my Irish Twin and our nephew D-Man about a woodworking project, with D-Man showing off the finer points.

Into my Brother Fred building a tower out of blocks with our niece.

Into my Mum chatting it up with our Brother Joe in Kyev (Kiev).

My trepidations never had a chance.

We have a mantra in my family during the holidays: We collectively make the menu. I make the table. Drew and Twin make the meal. We all do the dishes. Mom and Dad get to relax.

Every year since I can remember, I have organically assemble a table to compliment the food and company, with each place setting slightly different from the other. Sometimes it’s country-chic. Sometimes it’s majestic-china. Always, it is filled.

This year the theme went minimal and a little too Christmas-y.

Unfortunately, the only real orange I could find was the Black and Decker drills in the garbage. I gave that about a 2.6 second consideration before deciding to go with cashews, a wee pumpkin, and a hot dog stand toy.

And since 2018, hanging on one of the chairs is my father’s favourite baseball cap from the USS Craig, the ship he served during his time in the military.

The lovely cooking smells and the familiar sounds of banter, stories and sharing as the game plays in the background was nothing short of intoxicating.

It was indeed a glowing Thanksgiving up there in the Blue Ridge Mountains.

I am much obliged and most humbled.