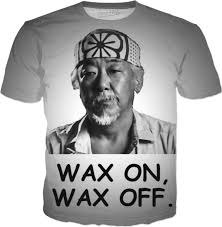 I had a dream I roomed with six people in a firehouse. One of those people was Billy Zabka, the actor who portrays Johnny Lawrence alongside Ralph Macchio’s Daniel LaRusso. In my subconscious Billy and I watched TV then drove around country roads before stopping to walk around its hills. There was so much talking in my dream, it went on forever.

I wish my dreams meant something. I wish they were otherworldly and sage, like a third eye. Instead, last night’s dream was just the result of me reading a Wikipedia entry about The Karate Kid before I fell asleep.

So this morning I went down a YouTube rabbit hole of the Cobra Kai.

I’ve a wasted day on my hands. I wanted to call today a lazy Sunday, maybe catch a game or go for a drive, but instead I’m still here and using this blog as an excuse to avoid tidying up my poor wee cottage and being a functioning member of society.

It’s not all my doing, the weather is hot and humid today, with a chance of Autumn by the end of the week.

Oh, am I looking forward to the change of season to finally be here. I had a glimpse of it a few weeks back when I was back in the U.K. for 10 glorious days. Long sleeves. Clear air. Country smells. Pretty trees.

Autumn is my favourite time of year hands down. It’s a chance to refresh the lungs and be dazzled by colour and clouds. Oh, and the aroma in the air from real fireplace chimneys and fallen acorns … so magical.

Right now, though, it’s hot and humid and dusty, which does little to inspire the senses. At least that is what I’ve been telling myself since I woke up … Sigh. I do believe I may be complaining.

That being said, I cannot change the weather. At least, I’ve not found the button. I can, however, stop being a beach bum and make something of the rest of this day.

There. That wasn’t so hard now was it?

Happy Sunday. I’ll be back later.