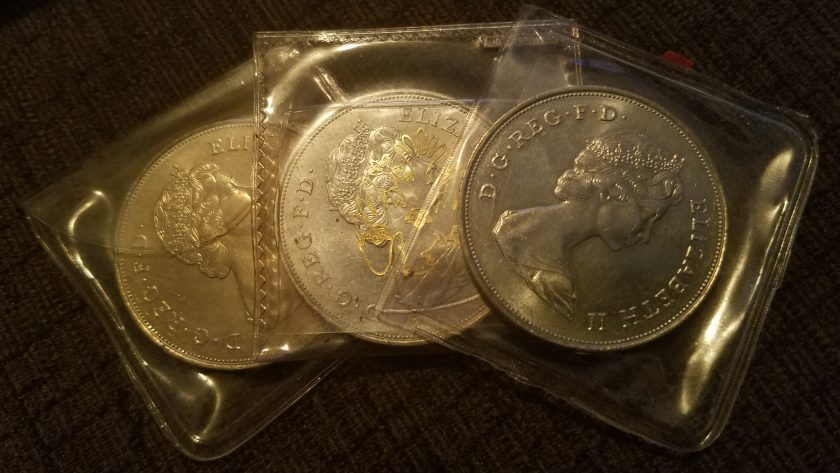 In London we lived within walking distance from Grosvenor Square, and sometimes I would walk down our Lane to the Square to visit my Dad at his office.

The first time I did this, my Dad alerted the security guards that I was coming. He told them to look for a little girl with freckles and Irish eyes. When I walked through the large revolving doors, I was greeted by an older English gentlemen who, in my memory, was dressed like a train conductor … circular hat, waistcoat, jacket, matching trousers and aging hair.

After identifying himself and saying my name, he rang my Father’s secretary to say I had arrived.

As we waited, the kindly man was making small chat when he pull out a coin from his pocket, held it up, and asked: Do you know what this is?

In my outstretched palm he placed a thick silver coin, over an inch in diameter, in a plastic cover.

I told him, at my tender age of 8, that I did not know. The old gentleman smiled and said: THAT. Miss. Is a British Crown.

“Always a heavy silver coin weighing around one ounce, during the 19th and 20th centuries the crown declined from being a real means of exchange to being a coin rarely spent and minted for commemorative purposes only. In that format it has continued to be minted, even following decimalisation of the British currency in 1971.”

He explained what a Crown meant but I didn’t follow it beyond that it was beautiful and special to him.

Soon my Dad came to collect me. I made a gesture to hand back the coin, and when I did, the fancy train conductor smiled and said: Oh, no Miss. That is for you.

I thanked him as my Father took my hand. And with that the white haired man walked back to his post.

A few years ago I struck up a friendship with a person who was in a similar personal spot I was in. For a time we were kindred spirits. We went to the pubs. We went to Canada. We ate at local restaurants. He cooked dinner on my rooftop grill. We ate oysters that he schucked outside on his balcony flat.

One night, at a pub, after a previous talk about coins, I produced one of the three Crowns I collected whilst a child in England. I told him the story of the train conducting man at my Dad’s office in London. And in one sentimental moment, I gave him one of my Crowns.

That person is long gone. Years now. If I had to count maybe four? I don’t know. Numbers are not my thing.

I have issues with where to place that guy in my history, so I opt to not put him anywhere and think of him as little as possible. But every once in a while, and I don’t mean often, maybe once or twice a year, he comes into my head and with that the idea of him is eclipsed by the Crown I gave away.

When that happens I think: Why did you you do that? That coin had no value except what it meant to you, and now it’s lost forever.

This is usually followed by a sigh.

No point going there.

Yesterday was a Heat Excessive Day. I stayed inside as temps rose to 36C which, if my math is good, is a whooping 102F.

Sometime in the afternoon I ventured out to the front porch to experience Mother Nature’s rage. Ugh. That’s all I have to say about standing in weather where no matter what you’re wearing, you’re overdressed. As I turned to go in, I realised I had not checked the mail in a few days.

My snail mail goes something like this. Retrieve from mailbox. Hope I don’t find spiders. Walk inside. Open waste bin. Throw away.

However, amongst this day’s throwaways was a light tan envelope, handwritten with my name and address, with two postage stamps, no return address.

I thought: Yes! My new work token, which will allow me remote access to my accounts beginning Tuesday, had arrived. I threw away the junk mail and ripped opened the top of the padded envelope.

As I looked inside I was surprised to find that the token, which normally is a 1/4 inch plastic device, had changed to a large circular shape.

I tipped the piece out of its plastic pocket, and onto my palm fell not a token … but a British Crown. In a plastic over.

As I stood in my kitchen, bin lid open, I heard an old English voice ask: Do you know what this is?

And with that, I held the coin between my thumb and index finger, smiled and thought Oh yes. I know exactly what this is.

I don’t why this Crown came back to me. There deliberately is no address other than my own on the package. No note inside. I am unclear whether the coin was returned in malice or disregard or a kind gesture. It matters not to me.

All I know is yesterday I retrieved my mail and, in turn, an unexpected part of my childhood fell into my hands again, back where it belongs.