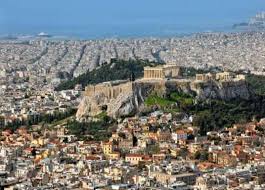 From the moment we moved to America I wanted to go back to Greece.

Greece was the place I considered Home. I missed my friends and teachers. I missed olive trees, the Aegean waters and the yellow Moon. I missed our house and the views of mountain behind us and Athens in the distance below. I missed Kifissia and Kefalari, Glyfada and Nea Makri.

I also missed me.

We came to America in the middle of my high school education, and in the middle of that year. It was an unmitigated disaster. Culture shock does not even begin to explain what I experienced being a student in America. It is a scar now, but it was an open wound then.

To offer a bit of balance … I used to love learning and attending school. I loved being with my teachers and being an active participant in that world. After school activities. Student council. Plays. Music. An avid sports attendee. I even enjoyed the community we had during the bus ride to and from campus.

If I had to overly sum the academic in me, I would say I was a capable student with an enthusiasm for the classroom and a wonderful sponge for knowledge. I’ll take some credit, but I attended a place that encouraged flourishing minds.

Week one at my new school in America I witnessed racism, cheating, stoned students and two in-school fist fights.

Week two someone wrote BITCH on my locker. Three girls threatened me with violence so much so that I only used the bathroom when classes were in session. Metal spikes were left on my chair. Classrooms were dirty.

In the first ten days of being a new student, my food tray mysteriously fell out of my hands four times and twice a foot not my own found my ankle. The lunchroom monitor lady informed me that being mid-year all seats were assigned and I had to stand to eat.

It would be so nice if this were not true.

By week three I found a spot down a half-lit hallway where I could sit on the floor, with my back against a protective concrete wall and eat my lunch in peace. An occasional adult would pass by and without stopping inform me that I had to be in the designated area with the rest of the students. Each time I would stand as if to gather my things, and, as they rounded the corner, sit back down again.

C’mon. That was someone’s kid in that hallway.

To get out, I enrolled in the school’s vocational programme, which meant three hours of my morning were at that cesspool and the rest at an actual job.

I took a minimum waged job washing dishes at a nursing home where I met like minded students. We bonded as spirits of the misunderstood during school, whereas at work we moved efficiently, unsupervised and harmonious together.

Work became the place I felt most like the me from the me back Home. Sometimes I would skip the mornings and go directly to work.

After graduation, and much to the distress of my parents, I told them I needed to take a gap year before going to college. I said I wanted a break to work. That wasn’t completely true.

My mind was made up that there was no way I was going back into an American system of meaningless curriculum, sloppy teachers and socio-pathetic peers. Besides, what institution of higher learning wants a barely graduated semi-adult?

My dishwashering gig didn’t last long as I was promoted to a line prep position which turned into organiser the dining rooms. That lead to a receptionist position upstairs which turned into an administrative job reporting directly to the big boss. By the time I was 18 I was assistant to the second in command.

I had an income. I had a place to live. I had my car. I was doing JUST fine, thank you very much.

I don’t believe this narrative would have changed had it not been for a single instance I had one day at the office. I remember the moment but I don’t remember the reason. I was looking at something I had written or was struggling with … when I realised I had the mind of a 10th grade education.

I was, in a word, appalled.

And unless I did something about it, this was as far as I was ever going to progress. Further, it dawned on me that I had allowed those last years of high school define what I spent from the age of five building and maturing.

Then I got angry.

By the end of the following week, I had consulted with two of my brothers attending university, and spoke with my parents. I learnt which colleges would take me and which would only let me through their doors if I first walked in with two years of solid scores. The latter was one I wanted.

So I found a community college near my parents, located a roommate to take my place where I lived, and tendered my resignation.

Within two months of that aha office moment, I was jotting down notes on Renaissance and Baroque music for Mr. Handley’s 101 class, and reconstructing a DNA double helix with my lab partner in Ms. Jane’s biology course.

Not without a learning curve, those two years playing catch up flew by with only a break during the winter holiday. It was a rousing success. I collected my scores, and when completed, proudly stood before a building that was to be my next two years: A real academic hall, in a real university, making for future, with professors who wanted to teach and young minds wanting to share.

If you are see the camera pan out from a scene of me holding my backpack as I smile up at a tall building in front of a blue sky… then we’re watching the same movie.

And that is the way it went for two more years, again with only breaks in the winter. I read the Classics. I learned about Literature. History. French. I learned about Etymology. Linguistics. I learned to Write. I lived in the Library. I quoted Paradise Lost. I fell in love with Maya Angelou. And on and on and on. I was me. Oh, I like being me.

I remember early on searching for a spot midday outside to eat my sandwich. As I walked up the majestic set of white stairs that lead to an equally impressive manicured lawn, I heard my name called. I turned to see, seated under a large Magnolia tree were fellow students from my Early American Literature class. They were seated in a circle on the grass having lunch. As I approached, they moved to make room for one more and asked me to join. I did.

About six weeks prior to earning my degree, I received a phone call from a family friend in Greece. She and her husband were launching a school and needed an English-speaking teacher to assist with the kids’ development. Could I? Would I? Come over and work for them? They would board me in private en suite room.

The only condition for coming was I had to buy my own plane ticket, and them being religious, had to have an understanding/relationship with God. Broke, I had to figure out the first. The second? That’s been a constant in my life from birth.

I don’t think my feet touched the ground the entire conversation. I couldn’t believe my ears. I said yes before she finished talking. I did it. I fixed the glitch and was finally going Home.