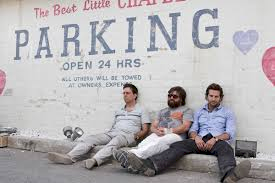 I drank too much last night. In my defence, I wasn’t the only one. But that means very little today as I sip my fourth glass of water and take my second aspirin.

I wanted a night off from being my own best friend. Now, if my recall is correct, and no pending texts are any indicator, I did just that and no one got hurt.

I initially went to my local to catch what would be Kentucky’s big upset and grab a bite. About 5 minutes in, Ronnie and Tim, a couple taking a break from planning their daughter’s wedding, joined me at the bar to watch the game. Ronnie has lived in the same place for 35 years and works in commercial real estate. Her husband, Tim, built his web business after realising his music aspirations weren’t going to pay their bills.

We had a super engaging conversation, which lasted well over an hour and spanned everything from Catholicism to parents to me moving here 18 months ago to pictures of their kids … the game was fun too. When I made mention that I blog, they both requested I say nice things about them. What’s not to like? Done.

Then I meant but forgot to order food. Which may account for the second aspirin.

Later I helped, or I hope I helped, convince a guy not to leave his marriage. I didn’t volunteer, he asked. He wanted to know what it was like ‘on the other side’. So I told him that when the other person is a really good person … divorce doesn’t just suck, it’s unbearable.

It’s easy to be honest with strangers when there’s no heart to consider.

I refuse to do what I call ‘therapy’ talk. You see this a lot in interviews … where a person parrots what a licensed professional told them to think.

It’s that uber insightful overly positive inhuman response to the question: How are things really?

And you get back: I’m in such a good space now. I’ve learned a lot about my triggers. I’m so much stronger for having dot dot dot. I needed to feel dot dot dot in order to dot dot dot.

Over the top nonsense said in between stints at rehab.

There’s nothing wrong with admitting things are wobbly and you fucked up. Just because you’re feeling better now doesn’t erase what it was when it happened. Being direct doesn’t take time, and once I took Mr. Indecision straight up the gut, we moved onto lighter topics ’til I called an uber.

When I got back to my poor wee cottage, my brother Paul stopped by. So we drank rum and traded classic Gene Wilder movie moments. I have no idea when he left. Which may account for this fourth glass of water.

All in all I give myself three gold stars for spending about 7 hours thoroughly blowing off steam last night.

And it’s taken me the better part of the day nursing this hangover to prove it.