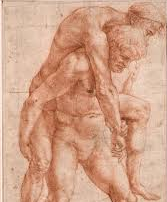 Two friends are on a local train, heading to Mountain Dew Station.

The train is half crowded for a Saturday night. It’s countryside dark outside which makes the silver interior of the car almost painfully bright.

Without warning, one of the friends demands the other friend turn the train around.

The friend panics more. Stop the train he begs. We have to go back he says. His voice is at a near yell but no one pays him mind except his friend. I can’t go to Mountain Dew he cries.

The train slows to a station stop and the doors open. The frantic man runs out, with the other following, pleading for him to hold it together.

Another impossible request. He can’t. He’s beyond the point of chemical imbalance.

The train speeds away, leaving behind a hushed night.

It’s dark and damp in the deserted outdoor station as the strung out man mentally collapses. The friend, tears welling in his large brown eyes, tenderly hugs the once towering soul from behind.

Now physically dwindling, the defeated man lowers his head and repeats: We can’t go to Mountain Dew. Shaking his head he says, I just can’t.

No way to leave. No place to sit. The sad friend takes his despairing comrade’s arms … And, like a blanket, drapes the exhausted man on his back, so his shoe tops are dragging on the ground and his head can rest in between his shoulder blades.

Wordlessly the two friends pace the empty train station. One man leading as the other man closes his eyes and descends into his sleep.

The ill friend in my dream was the recently departed Brody Stevens. The caring friend was Kumail Nanjiani. I’m only aware of those individuals through podcasts. I wonder if those two were good friends.

I am beyond myself for having dreamt something that specific, vivid and ordered.

I’m still not certain that it wasn’t my brain recalling a movie I watched.