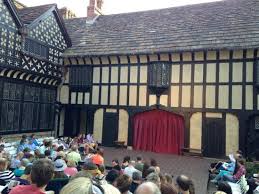 I’m back to having daily 5 seconds of sheer panic attacks.

It waves in from my toes and sits in the pit of my stomach as my current life and recent past flashes through my mind like an Orwellian-inspired movie.

Centred around my bank account, the last person I kissed, JB, friends who are gone, this house, my car, my bodily endurance, my parents … it’s an intense warts-an-all mirror.

Thankfully it’s lasts only a matter of seconds before it waves out.

It is a stunningly beautiful day today. Blue skies peppered with bright white clouds, vibrant colours, a slight breeze is bringing in fresh air, birds are playing in the grass.

It’s supposed to stay that way, which is AWESOME because this evening I am off to enjoy an outdoor presentation of the The Tempest, one of my favourite plays. It’s being held at an historic mansion off the river.

Bonus, I’m going at the invitation of my Brother Drew and his wife Rebi. We’ll have light fare and wine on the lawn with a few of their close friends (one being Drew’s best friend from Greece – see I’m not the only one), before taking our general admission seats to watch actors act Mr. Shakespeare’s words.

I’m getting excited just thinking about it. As of yesterday morning, however, I wasn’t sure I would attend.

I’ve been in a state of an emotional malaise since seeing my Brother Paul the other day when he stopped by to cut my lawn. It’s not him, it’s me.

I’m a fan favourite of Paul. Lots of people are – he has that Thing. Even our Dad was enamoured with Paul. He has an ease with people, and his intellect is off the charts. He can be a bit of a rascal, but there’s no game playing there. He is honestly charming. And this natural gift is a Force which leaves a footprint.

One of the reasons I moved here was to spend more time with both my brothers. However, it turns out Paul doesn’t have that kind of time for me in his life. He has a social scene and lives right around the corner, except with me he has designated himself my Sage Owl, not my Friend.

I didn’t get it at first. But sometime last year I realised I only see Paul when he cuts the grass, so I’ve since stopped asking him to join me out for a drink only to be told he was busy.

As Paul’s almost-Irish-twin, I carry his heart and anxiety, and in turn, he watches over me and is my guiding light.

Growing up and all through university we were constant companions in nearly everything we did. We were Baptised together. Had our First Communion together. We got Confirmed together. We went to the same schools. Took the same degrees. Books, swimming, movies, hikes, road trips … you name it. It was me and Paul, learning together. Paul, being older, always one step ahead.

Then we were split by careers and adulthood, only seeing each other on holidays. Even though we grew up and went our separate ways, we always touched based. But it was my poor expression of devotion to JB which set the tone for us today.

See, Paul hasn’t forgiven me for not making it right with the man he calls his best friend. Neither, if this hasn’t been made totally clear, have or will I. In that respect Paul and I feel the same. My Brother loves me but his hands are singed, and I’m not quite right in his eyes anymore.

So now I am Paul’s duty, not his mate. This reminder sometimes leaves me isolated after he comes around.

Late yesterday afternoon I managed to pull myself out of the funk I had been in. I guess I just needed time and distance, and a little kick in the pants, to get myself out of Paul’s shadow.

I did a quick tidy of the poor wee cottage by simply adjusting a few minor things: Recycling, putting books away, straightening the two sofa throw blankets, replacing bathroom towels. It certainly made the place seem more put together, and helped me feel more present.

Then as the day was fading, I poured myself a refreshing rock glass of freezer-chilled Bombay Sapphire gin, neat of course, and ordered my ticket to this evening’s play.

Today I’m very glad I did.